Standing in front of the BMW M3 Touring E46, one of the most difficult-to-understand questions around the history of the M3 becomes even more enigmatic: Why the hell did M GmbH never have the courage to offer a station wagon version? Yes, the arguments are well known and certainly sound: viewed worldwide, the market for performance station wagons is quite manageable and the elaborate rear axle construction of the other M3 variants harmonizes only partially with the desire for the largest possible trunk.

And yet: The BMW M3 Touring would not be alone in the distance, after all, the competitors have decided in the same situation still for the development and production of appropriate vehicles. After all, until the development, it also came with the M GmbH, because the BMW M3 Touring is ready to drive in front of us. The unique piece is in a way a feasibility study and should show that the basis of the 3 Series Touring is quite suitable for a conversion to M3. 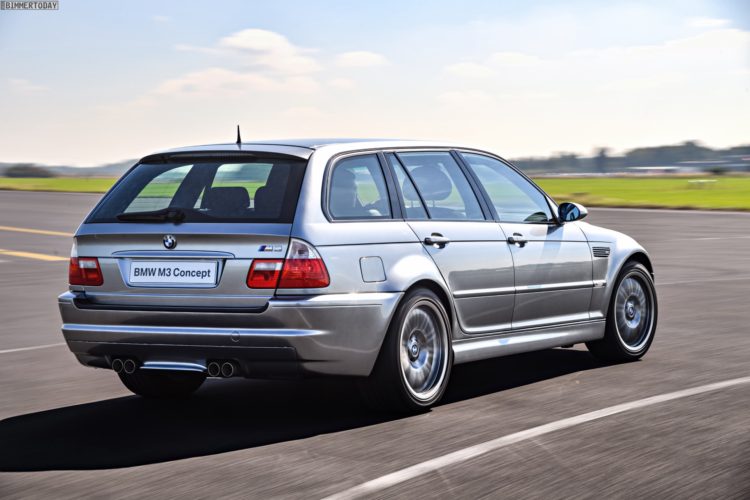 After other rear doors were initially made in prototype construction, which would have allowed a harmonious transition to the much wider M3 wheel arches, a solution was found with the usual 3-door in terms of cost. But even the resulting reduced costs were ultimately not enough to convince the Board of the need for a BMW M3 Touring: If the target group is pointed and the expected sales are small, the financial risk is usually the beating argument.

Whether the decision in the case of the BMW M3 Touring E46 was ultimately right or wrong can not be determined today. What is certain is that the power station wagon would have found its fans and enthusiasts: the performance of a sports car and enough space for all the challenges of everyday life under one roof are a package that undoubtedly has its appeal and for many customers significantly larger Erstwagen- Has potential as a coupe or convertible. Reminder: Even a BMW M3 sedan was not offered in the E46 generation.

A few years ago, we were able to examine the unicum presented in the ” Secret Garage of the BMW M GmbH “, but now we had much more time for a closer look at the vehicle. Under the hood is the 3.2-liter high-speed straight-six with the internal code S54, this sends 343 hp to the rear wheels and is one of the most powerful engines that were ever installed in a production BMW. In the interior, a special seat cover is used, because between the seat backs made of Alcantara shines an F1 fabric called fabric, which is metallic even when touched and thus clearly different from the usual fabric or leather range.

An interesting detail is the painting of the vehicle, because the BMW M3 Touring was the first BMW in Chrome Shadow Metallic – a color that was used in the following years for numerous concept cars of M GmbH and has lost none of its charm to this day , To achieve the special effect, the cars are first painted in high-gloss black and then in bright silver. All contours of the body are so particularly good effect and can be clearly seen especially in the garish exhibition light.

Jakob Polschak (Head of Vehicle Modeling and BMW M GmbH workshops): “With this prototype we were able to show that from a purely technical point of view, we were able to integrate a M3 touring into the ongoing production of the normal BMW 3 Series touring without any problems. It was important to prove, among other things, that we could adapt the rear doors of the production model to the width of the rear wheel arches with rework, without the need for new, expensive tools. “

This article was posted in BMW and tagged bmw engines. Bookmark the permalink. Follow comments with the RSS feed for this post. Both comments and trackbacks are closed.